It’s hard to know how momentous a day the 26th March 2011 was. Only time will tell. But it certainly felt good to me. At least 250,000 people marching in peace for a positive alternative to the unfair, unnecessary and divisive cuts. Cuts that are purely ideologically driven. 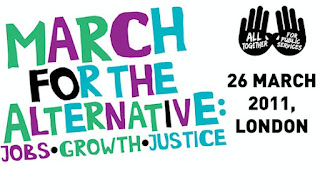 Our coach left Norwich at 7.45am on Saturday morning. Unite, my union, had provided two coaches for their members. It was good to see at various stages of the journey, as we joined first the A11, then A14, back to the A11 and finally the M11, so many other coaches clearly heading the same way and for the same reason. It became even more apparent when we stopped at the watering hole known as Birchanger Services and saw a gaggle of coaches all full of smiley people. The buzz in the air was one of optimism. Even the massed ranks of Socialist Worker newspaper sellers, the Jehovah's Witnesses of the political world, couldn’t dampen our enthusiasm. When we arrived in London we were dropped off on Southwark Bridge. Quite a number of coaches had stopped there to let off their passengers; masses of members from several unions. As we walked to the starting point it started to become apparent that the march was going to be something really rather huge. The 100,000 that the TUC had hoped for was going to be reached that was for sure. I wended my way through the crowds to where I could see a huge Unite balloon and a sizeable amount of Unite banners and flags. After a fair amount of noisy but good natured standing around we eventually set off, a little late, but with enthusiasm and a sense of purpose. It was pleasing to see that my fellow marchers were varied as well as many; there were people of all ages, along with a generous mix of ethnic backgrounds, gay and straight, and across such a wide range of professions both public and private. I don’t really hold with class classification but for the purposes of understanding I will note that there were a lot of middle-class people on the march. That’s not to diminish or downgrade the marchers who do not fall into that category but it’s just to make a point that no party will ever be elected to government if it does not enjoy considerable support from the middle-class. I’m not saying I necessarily like it but that’s how it is. Both the Tories and the progressively insignificant Lib Dems are pissing off the middle classes big-time. And, if they stick to their two-dimensional ideological economics this trend will continue.
The mood of everyone around me on the march seemed to be one of good humour. We were there to make a serious, positive political point, but we were pleased to be given the opportunity to do so. There was a definite sense of camaraderie, co-operation and community. It didn’t matter who you were you were on the march for the common good and that’s what counted. The march progressed at a reasonable pace, even for someone like me who is used to walking at brisk speed, only slowing at geographical bottle-necks en route. The route was well stewarded and well policed, with both offering smiles and friendly advice if required. It was also good to see observers from Liberty keeping an eye on proceedings. It was a truly perfect march, and with only a few spots of rain near perfect conditions. Just over two hours after we set off we ended up at Hyde Park where the already assembled masses were large in number. This was quite a surprise because I’m sure there were more in the park than were in front of us on the march. Clearly many had come along just for the gig in the park. And what a gig it was, stirring speeches from the great and the good plus a blinding mini-set from Show of Hands. All quality stuff. It made me feel very proud to be a union member. There is a warm feeling of collectiveness, society and solidarity that only the left engenders and personifies. Something that those on the right with their ‘the individual over all’ philosophy will never experience and I feel sorry for them. I am in no doubt that there is strength in unity!
It was such a good day and so well organised by the TUC that I sincerely hope it is the springboard to further action and further political success. We need to show the country that there is a credible alternative to the lacklustre Tory financial masturbation that we are enduring at the moment. And we need to keep reminding them until we return the next Labour government.
at 23:08 No comments:

“All we are saying is give peace a chance”

If you so choose to subscribe to one of the world’s major religions then the taking of a human life is the ultimate blasphemy. There are no circumstances that I know of that allow you to usurp your god and exercise the power of life or death over another human being. For the religious person murder and war have to be an anathema. That doesn’t mean to say that only those that need religion are against war. Pacifism is about love and respect for one’s fellow citizens of this planet. That love and respect is not conditional. You don’t need a god to tell you that peace is the only sane way forward.
War never achieves peace. Peace cannot be forced upon people. Peace only happens when people want it and when they live it. Being a pacifist is not an easy option. In fact it is often a very difficult and challenging belief. Some people feel threatened by the notion which has always struck me as ironic. Pacifism is widely misunderstood. As a pacifist I could never endeavour to take or condone the taking of a fellow human being’s life. Not even if they were intent on taking mine. Peace is more than just not fighting. It is a state of mind. War never achieves. It only destroys.
Whilst governments and corporations are hell bent profiting from the manufacture and sale of arms we will continue to have wars. War is a capitalist moneymaking opportunity. To the capitalist money is more important than someone else’s life. War exists to perpetuate the retention of power and wealth in the hands of a few. That few may well change but the small numbers do not. No society can ever be civilised whilst it has an arms industry. The arms trade export misery and suffering world-wide. It has to stop! Human advancement has so often been brought about by people who are prepared to think the unthinkable, and are prepared to attempt the impossible. Peace can be the universal option if we have the courage to believe in it and do something about it. “War is over if you want it” 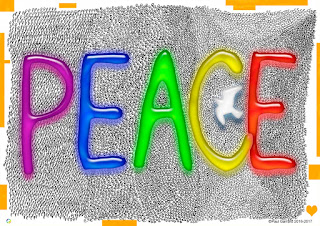 I have mentioned this before but it is worth mentioning again that in all of my 37½ years of voting I’ve never ever elected an MP or even manage to influence the election of my MP. It doesn’t actually feel very good. This is why I have always been in favour of voting reform. The first past the post system is just so unfair. Unless an MP is elected with well over have the votes that MP can never claim to represent the majority of their constituents. I used to think that some form of proportional representation was the fairest and most representative way forward and when as Prime Minister Gordon Brown stated that he would be prepared to offer AV to woo the LibDems I couldn’t understand why. But the more I think about it the more I think that AV is probably the best voting system to have. What AV gives you over some forms of PR is the retention of one MP to one constituency. Retaining the MP/constituency link is so important when it comes to accountability. Another advantage it has over say STV (the single transferable vote) is that it is not over complicated. AV is much fairer than what we have at the moment because it enables more people to elect their MP. A larger mandate for our representatives in parliament has to be healthy for our ersatz democracy. These are just some of the reasons why I shall be voting Yes for AV in May.
at 22:46 No comments:

Liberty is only ever secular

“Democracy can never flourish if the workings of a state or the major influences within that society are not secular.” *
It should be every person’s right not to follow, or for that matter to be able to follow a religion or belief system of their choosing. It must wholly a personal issue. As soon as religions try to indoctrinate, coerce or oppress people then liberty is lost.
Unfortunately in undemocratic Britain we still have institutionalised religion. Despite its influence declining the C of E still has connections with government. Parents are allowed to brain-wash their children and get state help with that brain-washing through the religious school system.
My big fear is that with the cuts in public services the only charities that are well funded enough to take up any of the slack will be religious based ones. My even bigger fear is that, as part of the Big Society, Tories will turn a blind eye or even encourage religious groups to provide services and proselytise. Vulnerable people will be at the mercy of god-botherers of all shapes and perversions. Liberty for the disadvantaged will not be an option.
*a quote by me on Twitter on 14/3/11
at 11:15 No comments:

Well that’s certainly how it feels to me. As a car driver, very occasional cyclist and mostly pedestrian type person it would seem to me that the liberty of the latter has all but been lost. And no doubt this ConDem government will with its actions consign us to permanent perambulatory serfdom. This government is supposedly pro-motorist. Their idea of being pro-motorist is a strange one, but then they are Tories so why wouldn’t it be? Basically their big idea about being pro-motorist says, ‘if you commit a motoring offence we’ll ignore it’. In the name of liberty they are encouraging people to break the law. Motorists are being given the freedom to oppress; a very shallow freedom indeed. The removal of speed cameras, the cuts in police numbers and the financial castration of councils has and will continue to drive us down the road to total motoring anarchy. The evidence is very clear for all to see. Too many motorists now just ignore the law. They drive like speeding maniacs and then just park where and how the hell they like. In its urban homeland, the habitat of choice for the law-abiding pedestrian is the path and the pavement. unfortunately today’s motorist has no respect for the domain of others. Parking on the pavement is the fashionable thing to do these days, it is so prevalent, and  it’s going to get worse I have no doubt. Mark my words!
at 21:13 No comments: