A few months ago I mentioned my album, If... ...McGonagall made music, on here. Well it's finally finished.

The album consists of ten tracks and has been released on SoundCloud track by track over the last few months with the final track ‘Silvery Tay’ being the last release. It is also available to purchase as a download, on a pay what you feel able to basis.

First and foremost I'm an artist and I approach composing in a similar way to my art. Well, actually music is just another artistic strand. Music composing for me is a process very much like collage.I hope I've made it challenging, so it'll never have popular appeal, but I don't really care about that. If some people like it well that's good, if people don't like it well that's fair enough too.

My music doesn’t fit into any one particular genre. Loosely speaking it’s a mix of ambient and up tempo avant garde, but it contains quite a lot of emotions and influences, so that categorising it is difficult. Which is how I like it.

Following on from my Eureka post of the other day I saw this article on openDemocracy entitled, The revolution will be networked, by Paul Hilder. It offers some very good arguments as to how the left needs to organise going forward. I urge you to read it.

We can take back control by building a popular progressive network, a movement built from the ground up. Now is not the time to give up hope. A people's network can help establish true democracy and put real power in the hands of the people. It will require action and enthusiasm action to make a start on some of the practical issues that need addressing, and action to start projects that will help to improve working people's lives. We need to educate people and help them to help themselves. Enough is enough.

It will mean a lot of work at grass roots level. Improving and expanding the foundations that we need to build upon. We have to build socialism, we have to build Jerusalem from below upwards. It cannot and will not be imposed from above. As the article says:

Rather than simply seizing the broken machinery of top-down control from the old right, the Corbynite left should be leading Labour towards a networked party. It is time to build a base of millions of active and empowered supporters, to fundamentally reshape our country’s culture as well as our politics. Only then will Labour grow strong enough to win; only then will Labour truly deserve to.

I'd be interested to hear from anyone that feels of a same mind and wants to get things done. 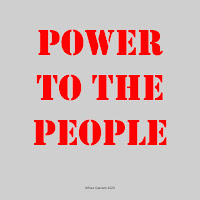