In our current situation, coping with the COVID-19 pandemic, it feels like the world has been turned upside down, that life will never be the same again. Many people will die. Many will lose loved ones. Many will suffer hardship and mental anguish. This is a very frightening time. This is nothing. It’s a dry run. A practice. A mere picnic.

Those that survive will need to learn from this. The lessons from this pandemic must not be forgotten. Somehow we have got to try and communicate to the idiots that things have to change.

You think this is bad, large numbers of people dying, having our movements restricted, and with the difficulties of being able to buy everything that we would like because of empty shelves in the shops? You just wait for the progression of the climate catastrophe. It’s going to be like the fictional hell. You can panic buy as many toilet rolls as you like. You’ll never have enough to cope with the amount shit that’s going to go down. When the tipping point comes, and it will come, the infrastructure that is our life support will tumble like a pack of cards.

Think about the floods we had a few months ago, now the pandemic. There’ll be all sorts coming. Extreme weather, natural disasters, crops failing, mass starvation, violence as people with muscle (weapons) try and grab as much as they can. And it won’t be every so often, it will be everyday. There will be more deaths than those living can cope with. Bodies will be left to rot. Basic utilities will fail and won’t be replaced. There’ll be mass migration to areas that still have some resources. The human race will go into meltdown.

Some might consider this the wrong time to be commenting on this but this is exactly the right time. We are currently living through a rehearsal for the future. If people can’t appreciate it now they never will. 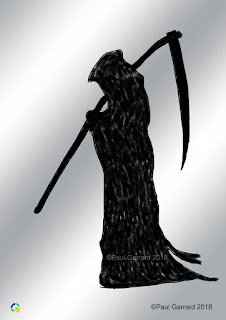 Occasionally on this blog I have the odd rant about language, and in particular about creeping Americanisms. There’s nothing wrong with Americans or their language in the right place. It just doesn’t belong here. English people who use American spellings or pronunciation on the other hand are, quite frankly, idiots!

One word that is all too often mispronounced by English people is schedule. I am often irritated by this. Weren't these people taught the correct pronunciation at school?

Recently I was creating a piece of music that I felt needed some words to go with it. Schedule, the track, was born.

This man broadened my horizons 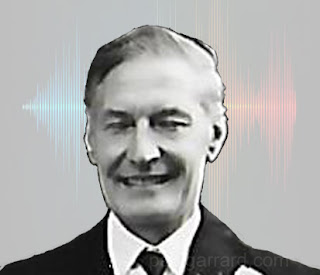 
This is my maternal grandfather. He was a serious, studious and bigotted man. Born in Sunderland he was a Mackem although he would have never claimed that title, in fact he would have probably disowned it. He was the sort of person that always wanted to better himself, as he saw it. He and his wife, my mother’s parents, hadn’t done too badly for themselves.

Grandad joined the Royal Navy before the first world war, possibly lying about his age, and that was his job until he was invalided out during the second world war. He had been a wireless operator and had served mostly, from what I gather, around the UK*, the Mediteranean and Northern Europe.

I was the first grandchild on both sides of our family, so as you can imagine I was the centre of attention for at least 18 months, and I think if truth be told I remained perhaps a little bit special for the rest of their lives. I was always made a fuss of. I was very lucky to be loved so.

He was a mass of contradictions. Nobody really knew what his politics were although his views were very bigotted. He believed in discipline, the rule of law and the status quo. He would sit in his rocking chair, on one side a pile of Daily Telegraphs on the other his aging wireless. The wireless that only transmitted people that spoke with a frog in their throat, or so I thought. The dial displayed stations and transmitters from far away places; Light, Third, Droitwich, Hilversum, London, North, Athlone, Brussels, Toulouse and Moscow to name but a few. As a little lad everywhere that wasn’t Bury St Edmunds was a strange land filled with strange people.

Art helps, it really does

In 2014 I had a breakdown. I reached the point where I thought my life wasn’t worth living. I was in total despair and came very close, a few hours away from taking my life. It’s still not easy to acknowledge that. That whole period felt like I was on a never ending roller coaster. It was hell!

All my life I’ve been creative. I don’t remember a time when I wasn’t drawing, painting or expressing myself in a creative way. I’ve always considered myself to be an artist, even in the lean times when I was either not creating visual art or when I was creating stuff and then destroying it. This of course adds to one’s anxiety. It also doesn’t help that I’ve always been my own worst critic. But in later years I had started to come to terms with my own creative abilities.

A year or so prior to my breakdown I had started to dabble with digital art. Once I got the hang of the software and had developed the mindset you need to be able to create in a moveable layered format I could really see its potential. I began to realise that this was where I wanted to be and had wanted to be all my adult life.

My depressions had always influenced and inspired my art, and although I didn’t always realise it, had afforded me a reasonable amount of contentment when I was in the creating zone. Little did I realise that it was about to play such a pivotal role in my life. I am so grateful for NHS Wellbeing and the charity Mind for the help they gave me in helping with my recovery, along with people close to me and a couple of very nice, caring people on social media. Without them I wouldn’t be here today. But one of the things that I could not have done without, and the one thing that really helped me to make sense of it all, was my art. My art was my life jacket. Through my art I was able to portray my feelings in a visual way, when words often failed me. My art soothed me. My art didn’t judge me. My art helped me come to terms with what had happened. Art is good medicine. 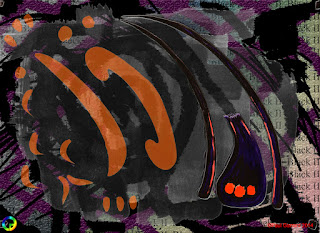 Black II
(my art making sense of my breakdown)

In these strange days of the Covid-19 crisis with its anxiety, self-isolation and lay-offs our mental health is as important an issue as our physical health. Our world has been turned upside down. Cultural activities are normally some of the ways we relax. The way we help to fill our leisure time. But with galleries, theatres, exhibitions, concerts and craft fairs etc now closed we have been denied much of the therapy that is art. So when Dr Janina Ramirez and others started suggesting that we share art on social media under the hashtag #ArtHelps I vowed I would start sharing art (my own but more importantly art by others) as often as I could. I urge you to do the same. 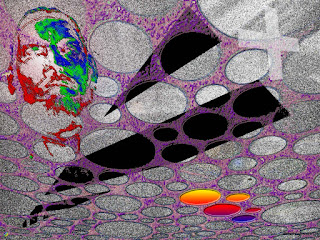 A Positive Direction
at 21:07 No comments: