I don't make any money from my art; so from that sense I've never been a professional artist. I happen to like it like that. If someone likes my work and would like a copy then that pleases me, but I'm not going to lose any sleep over it if they don't. I don't create for an audience. If there is an audience, well that's a bonus. I create because I feel the need to create. Some might argue that to make a living from art is to sell out because you are then creating for a market. But if you feel that your work isn't compromised and you can make a living then I say good luck to you. I wish you no ill. For me, my position as a free agent allows me to create the art that I truly want to produce because I have absolutely no pressure on me at all to produce anything other than that.

For as long as I can remember I've been a non-conformist. Seems to me that it is those who refuse to conform and those that challenge are the ones who encourage and facilitate change. As an artist I think it is important to challenge. Challenge orthodox thinking when you think that it may be flawed. Just because the zeitgeist suggests one thing it doesn't mean that you have to accept it, and that you can't challenge it. It's healthy to challenge. Creativity thrives when one, to use a phrase I dislike, thinks out of the box. Conservative thinking isn't really thinking, it's just a displacement activity. If creativity isn't radical is it really creativity? I'm not going to answer that particular question. You decide.

I think that judging art is just a ruse to monetise it, to turn it into a commodity. People who do this have no interest in art itself just how much money they can make from it. Sponsorship, brand aligning and art competitions all damage art.

Competition doesn't produce excellence it produces an outcome that is of sufficient criteria to be measured or judged to be better than the ‘rivals’. All art is only ever in the eye of the beholder. It can only ever be subjective. Therefore art can neither be good nor bad. Just what you like and what you don't like. Art cannot be judged.

I recently posted in an art group on Facebook about my opposition to competition in art. Quite a lot of lively discussion ensued. Quite a number of artists grasped what I was saying. Sadly, quite an aggressive small number couldn’t. I had challenged something in their tiny little comfortable world and they couldn’t cope with it. They were being asked to think and it made their brains hurt. Show me a reactionary and I'll show you an idiot.

Popularity is no measure of quality. Chicken, lager and milk chocolate are all very popular even though they all taste like shite. What do the masses know?

Art has no quality standards. Art is beyond judgement. 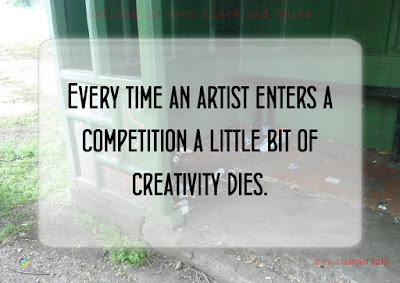 I am an atheist

I shouldn’t need to say that. Being an atheist should be the default human condition. It would be like announcing constantly that you haven’t got the lurgy. Religion is something you catch. It’s effectively a disease.

By the way, and for the record, i haven’t to my knowledge happen to currently be afflicted by the afore mention lurgy.

If you don’t feel that you can get through life without the crutch that is religion then that’s fine with me. Go ahead, but please keep it to yourself. I don’t need to know about it and please don’t indoctrinate others with your strange ideas.

Now I’m very fond of saying that nothing is ever black and white, which is truly the case, but I will try and keep this as simplistic as I can. Mainly because religion seems to be followed by mostly simplistic people. Okay, when I say ‘there is no god’ the god-botherers normally respond with something along the lines of ‘how do you know there isn’t a god?’ or ‘prove that there isn’t a god’. Why? Why do I have to prove the non-existence of something when there’s clearly no evidence for its existence? That’s like saying, ‘prove that Elvis isn’t alive and living on a double-decker bus on the moon’. The onus is on those who subscribe to the superstition to bring forth the facts. To date there is no evidence.

Beware people who quote the writings of Thomas Acquinas, they are some of the most narrow-minded of them all. They use it as ‘evidence’ to validate their superstitious beliefs. There is no evidence. The same applies to those who quote the bible, et al. The bible is a collection of contradictory writings by any number of ancient people’s trying to either explain their existence and or to keep others in line (oppress). This certainly applies to all other writings connected with the Abrahamic religions.

Religion exists to control people. Nothing more, nothing less. It is the opiate of the people.

If you’re happy with following a religion that’s fine but please don’t think it’s a normal thing to do. Question yourself, and I mean genuinely question yourself. Look for evidence. I guarantee you will find none. Have a nice day! 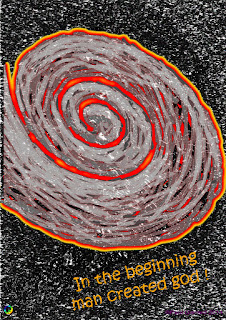 All works of art from one degree to another are self-portraits even if there is no literal image of the artist to be found in it. The artist will be present in the work. The artist will have put their heart and soul into it.

The literal self-portrait is paradoxically both a lie and the purest truth. The artist will project the image that we want the viewer to see but at the same time will, because we are human, convey our innermost feelings and our vulnerabilities.

Just over a couple of years ago I started a blog, Autoritratto, to showcase my self-portraits (in drawing form, painted form and photographs) when they came along. I do hope you can pay it a visit.

I have a membership subscription to the Art Fund. With it you get a National Art Pass which either gets you into exhibitions for free or at reduced prices. If you gawp a lot at art it’s worth considering joining. I think it offers great value for money. You also get a quarterly magazine which is very informative as well as printing some very interesting stuff. I was very pleased to see that the current issue, Autumn 2019, has an article on the self-portrait. Like a lot of writing about art it’s a bit pretentious but it’s well written. Entitled The Power of the Self-Portrait it says that:

"Artists’ depictions of themselves can be complex expressions of the self. With several upcoming exhibitions featuring self-portraits of prominent artists, Ben Street explores what lies behind their enduring appeal, to both artist and viewer." 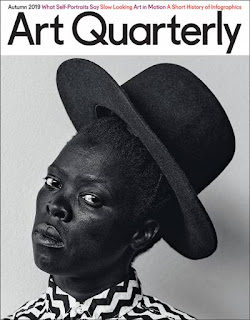 They certainly can be 'complex expressions of the self''.

Check out The Art Fund and please check out my art.

'The general uncertainty as to what is really happening makes it easier to cling to lunatic beliefs'
Biting and timeless reflections on patriotism, prejudice and power, from the man who wrote about his nation better than anyone.