I thought this seemed appropriate for a #SocialistSunday.

If you really want to take back control there's only one way to do it, and that's to 'get involved’. If you believe in democracy then you need to play your part as best you can. And as best you can isn't just turning up to vote at general elections.

If Brexit was a protest vote against politicians then it was a spectacularly immature and stupid protest vote. We get the politicians we deserve and if we are ambivalent, ignorant and/or disinterested in politics then we end up with the corrupt, the idiots, the gangsters, the bullies and the inbreds in charge.

Never underestimate the stupidity of the English electorate. They consistently vote in governments that do them harm. Large parts of the electorate would sign their own death warrant if handed to them wrapped in a sugar coated lie.

Sadly we don't yet live in a democracy. There are several things that need to change before we can truly call ourselves a democracy. The obvious thing that needs to change is our way of voting. First past the post is undemocratic and needs to go. Secondly we need to educate people. People need to be capable of critical thinking. They need to understand that “nothing is ever black and white”. If you have a blinkered view of the world how can you make informed choices.

People can't help being stupid. They've been condition to be stupid. The whole system is set up to suppress thinking. They are fed lies in the form of easy to digest bigoted soundbites by the capitalists. They fall for it all.

I was brought up on a council estate. I'm working class. I don't remember a time when I wasn't interested in politics even though I didn't always understand what was going on. I became a socialist at the age of seventeen and have never wavered since. I know that we will never achieve a fair, just and equitable socialist society until the working class have been educated so that they are equipped to make informed choices. The state aren't going to do it so as a movement we should. We will never have a socialist society until that happens.

I rarely apologise for my arrogance in calling stupid people stupid. Sometimes one has to tell it like it is. The trouble with stupid people is they don't realise that they are stupid because, yes you guessed it, they are stupid. The working class will only ever free themselves when they learn how to do so. 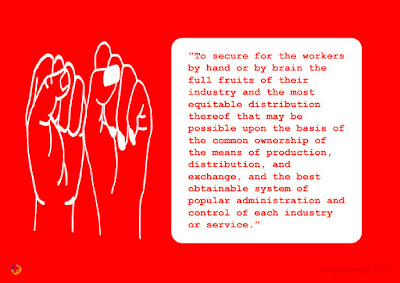 If you really want to take back control you can help here.

A little while ago we had a couple of cheese scones from The Cornish Bakery in Southwold. We didn’t eat them in Southwold but ‘ate’ them later at home in Norwich. I say ate but in reality very little was consumed. On first biting into them you could tell that they had an awful lot of sugar in them. They would have been very sweet even for sweet scones. But high sugar content with cheese just tasted vile. Utterly vile. My partner took one bite and said ‘they’ve got sugar in them’ and being a diabetic didn’t eat any more. I got a bit further. I don’t like to waste food so ate several bites but in the end I just had to give up. It was hardly practical to take them back to the shop so I complained via Twitter. Apart from gleaning that they do actually have sugar in their recipe, a brief apology and them asking for my email address I have heard no more. No offer to refund our money. Very poor customer service.

I’ve consulted several recipes to make sure it is not me that’s out of step, but none of them suggest putting sugar in them. No wonder we have a problem with obesity, type two diabetes and other sugar related problems when companies do this sort of thing. 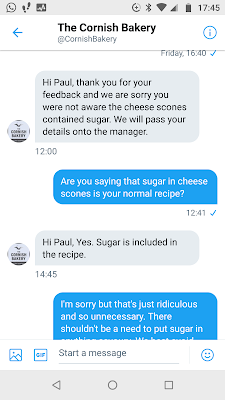 I know I bang on about competition a lot but I really do feel it is the essence of what is wrong with society.

If you're an artist then entering an art competition is the equivalent of sleeping with the enemy or selling your soul to the devil.

You can't judge art. There is no such thing as good or bad art.It's not a measurable thing, but by entering a competition you are helping to perpetuate the myth that you can. You are just adding fuel to the art as a commodity industry. Those that buy and sell art for large sums have no appreciation of aesthetics. For all they care a piece of art could just be a gold plated dog turd. They are only interested in its perceived value and money making potential.

Those in power remain so by dividing a society. The art 'elite’ do exactly the same by creating judgements and notions about what constitutes good, not quite as good and bad art. They have absolutely no authority to so.

Like is not a value judgement. Art is in the eye of the beholder. Art is subjective.Trying to judge art is as morally wrong as the holding of beauty contests or boxing matches, etc. etc. Collaborating with those that organise them is a betrayal! 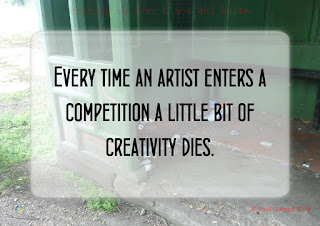 The trouble is it rarely is shameless. As a self-effacing introvert, promoting my art and the artist is never an easy task. It always seems wrong somehow. It's very difficult to shout, “look at me, look at my stuff”. It makes me feel sordid or unclean. But I force myself to do it. I suppose because if I don't who the hell will?

I would also like to thank all those that share my work on social media in the way of reposts etc. I am eternally grateful for all the kind people who take the trouble to pass my art on. I probably don’t thank those people enough, to my everlasting shame. 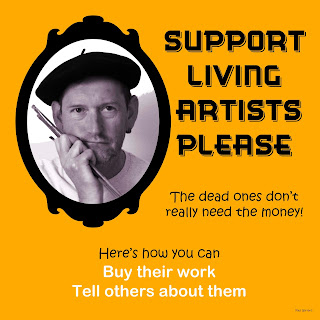