I need the money
And I can't see the stars, it's so funny," 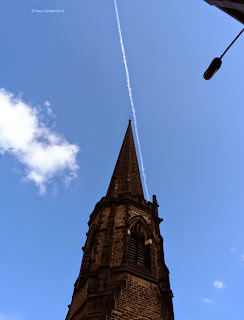 Some visit Lucifer, some may be crucified,
I'm goin' to Mars
Some talk to celluloid, some talk to shiny cars,
I talk to stars" 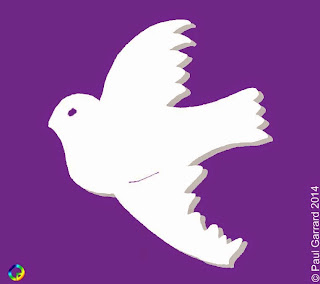 I’m in Sheffield at the moment having a wee break and ‘figuring out shit’ as I believe the pseudo-groovy might say. When I arrived the other day I had a wander around to get my bearings so to speak. On my meandering of the streets I came across the Friends Meeting House. A relatively modern building, unusual as many Quaker establishments go. I thought it would be nice to go to meeting whilst I was here. So this morning I did.

It was a short meeting, half an hour, due to a business meeting afterwards, so I just stayed for the half hour. I rarely go to meeting for worship now, but that’s another story. This morning there was some ministry about the first world war and reference was made to the Quaker Peace Testimony. It inspired me to write this blog and create the graphic above.

War can never ever be justified. War is wrong, plain and simple! There is no such thing as a just war and there is nothing brave, heroic or virtuous about being prepared to take the life of another.There’s nothing honourable about war. It hosts no valour. War is murder. Murder that panders to the greed, whims and perversions of the ruling classes. War is about keeping the oppressed classes in their place. Those in charge use evil means to get the rest of us to fight their wars; they put labels like nationalism and patriotism on them or they will stir up xenophobic or religious hatred. Being different isn’t a reason to want to fight someone. If you are one of those people that feel the need to believe in a god then killing is the ultimate blasphemy. If like me you don’t subscribe to superstition then war can only reinforce one’s view that there is no god.

War can be over if we want it. But until it is over humankind can never call itself civilised.
at 20:00 No comments: