For the many not the few

"Rise, like lions after slumber
In unvanquishable number!
Shake your chains to earth like dew
Which in sleep had fallen on you:
Ye are many—they are few!"

A verse from the poem, 'The Masque of Anarchy' written in 1819 by Percy Bysshe Shelley following the Peterloo massacre of that year. It is a call for freedom, and possibly the first modern statement of the principle of nonviolent resistance.

The market along with its champion, the warped political doctrine of neo-liberalism, has failed all but the super-rich. Equality is slipping further and further away. Economies should be run for the benefit of all. If they are not we are on a drastic slide back to serfdom. Do we really want that? I don't believe so. You'd have to be an idiot to want that. But then you have to be an idiot, or super-rich, or both to vote Tory.

'Thee are the many, they are the few' is a powerful statement. The derivation of several similar oft used political statements including the current rather catchy Labour slogan 'For the many not the few'. It is the essence of what true democracy should be about; power to the people. 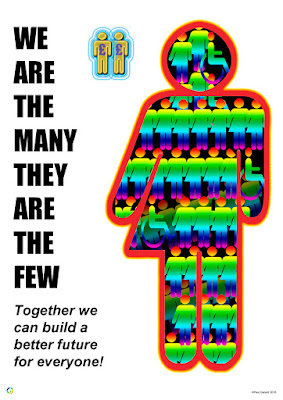 Please feel free to use, distribute and print this poster. It can be freely used as long as it agrees with the terms of this licence and if used for political purposes it is used for those that are broadly in agreement with the left-wing spirit of the poster. For free PDF versions please click here.


Now, listen to the music: