”Infamy, infamy they’ve all got it in for me!”
Spammers, hackers and people that steal bandwidth are evil bastards who for some reason don’t like me. As a result of their skulduggery I have effectively lost my previous RealAleBlog and use of my realalenet domain has been suspended.
I must bear some of the responsibility as I was using old software that should have been updated. But I liked it. It was easy to customise and I took the approach that if it wasn’t broken why fix it. Now I’ve decided to “love Big Brother” and switch to Blogger, “warts and all”. If I can extract the posts from the old database then I will transfer them over to this new location. I suspect though that the comments on posts will be lost. Because of this I’ve decided to do the same with this blog.
I’m quite sanguine about it all as at the end of the day it is only ephemera. Shit happens, but hey nobody has died, so I shall just carry on here. Normal service will resume as soon as possible.
at 03:49 No comments:

Labour has done a good job

Watching last night's Labour election broadcast really brings it home as to how much Labour has achieved in 13 years. Of course there is still a long way to go, and much still to achieve, but the party really does have a record to be mostly proud of (don't mention the war). The Labour party have actually done lots of good stuff. Wake up Britain before you piss it all away. Don't let the nasty party in to destroy it all.
See what good stuff Labour has done here.
at 12:20 No comments:

I like the aeroplane free skies that we are experiencing at the moment. Life feels somehow different, almost eerie. As a child born into the jet age, and in particular brought up in East Anglia, I have always known planes in the skies above where I live. In the early days this was due to a number of operational RAF camps housing either our home-grown squadrons or squatters from the USAF. Now, whilst there is still a certain amount of military traffic, civil aviation most definitely dominates the skies. So this current phenomenon is something new to me.
Clearly it is sad for those that have been stranded. Even more importantly it is sad and possibly tragic for those whose livelihoods currently depend on air freight or air travel. If this goes on much longer it is going to have major economic consequences. Regardless of the rights or wrongs of all the air traffic that we generate, when stopped suddenly it is bound to have an effect on trade and the world's finances. My big fear is that when this is over, as is surely will be at some point soon, we won't actually learn from it. We will continue to use ecessive amounts of air travel and freight. What we should be doing is thinking about ways to cut back on our aeroplane dependency. This is not going to be an isolated event.
Whilst we might never see disruption to flying like this again in our lifetime I'm convinced that other major events that challenge our lifestyles are bound to happen. Despite what detached right-wingers and pseudo-libertarians might think climate change is a reality. A reality that we need to face up to and start coming to terms with. Before too long we are going to witness and suffer from various other environmental extremes and catastrophes, many of which will be of 'Biblical proportions'. We need to change the way we live and how and what we consume. Wake up world!

"You can leave me in the air age if you like
But I'd dearly love to go back to my own time....

Email ThisBlogThis!Share to TwitterShare to FacebookShare to Pinterest
Labels: life

The arse shines out of the Sun

This is an interesting article on the Guardian website about the Nick Clegg 'phenomenon'. It doesn't tell us anything new about the attitude of newspapers, but it does offer hope, showing that life could be different. It shows that with a little more effort, at some point in the near future, the Sun could be defeated. How wonderful that would be!"
at 12:41 No comments:

I’m not planning on watching the party leaders’ debate on the idiot box tonight. I really don’t see the point. One of the problems we have in this country now is that the media seemed to have successfully reduced politics to a celeb-fest. Image is all. Power and influence resides with a handful of folk, and the party leader is portrayed as the party. We live in a Parliamentary democracy that should mandate an individual to represent the whole their constituency. Unfortunately it no longer quite seems to work like that. There is no office of Prime Minister yet the political process has been reduced almost to a race for this one coveted job. Why?
In many ways the individual party leader shouldn’t matter. It should be the party that people want to support. Supporting it in the knowledge that it will stick to the principles by which it stand. The party leader should merely be a custodian steering the party to where the supporters, members and MPs wish it to go. Idealism can be a painful affliction at times!
at 18:24 No comments:

Like the equation above, Tory economics just don’t add up. They say that their planned National Insurance giveaway will be financed by mythical ‘efficiency savings’. As I’ve said before on this blog the concept of cost or efficiency saving is very much an exercise in smoke and mirrors. It is no more than economic alchemy.
I heard Stuart Rose of M&S on the radio this morning ‘bigging up’ the Tory policy. He was essentially saying that if the private sector can make cost savings then so can government. I work in the private sector, for a large multinational group of companies and I’ve seen cost savings in action. I can tell you exactly what happens wages are frozen or cut, new or replacement equipment is just not bought, suppliers have to wait longer to be paid, positions remain vacant and people are made redundant. This in the short term saves money. Long term it probably doesn’t, as it will start to make an organisation inefficient. The impact of any money saved is diminished by the absolute shed-load of man-hours spent on meetings about cost savings, conference calls about cost savings, presentations about cost savings, measuring the cost savings made, publicising what a jolly good job everybody has done and how much has been saved. What everybody fails to see is the amount of time wasted on ‘cost saving’ and even more seriously how the ‘eye is taken off the ball’ on normal day to day procurement issues which again raises costs. The old adage that you don’t get something for nothing is so true. “There is no such thing as a free lunch!”
I was amazed at how well the government handled the economy when we when into the worst recession in living memory. Compared with the shoddy way that the Tories handled things in the Eighties and Nineties Labour have been exemplary custodians. In a recession the Tory answer is always to use mass unemployment as their blunt instrument of choice. Tories love the Yosser Hughes style economy as it’s their way of keeping the majority in their place. Tory economics are heartless, uncompassionate and designed to reward their paymasters. Their wealthier supporters will gain from ‘efficiency savings’ as this article affirms.
A vote for the Conservatives is a vote for blatant cronyism, economic mismanagement, mass unemployment and fat cat heaven.
at 23:38 No comments:

Why on earth do people vote Tory?
I suppose that if you are rich (whatever that might mean) then you will driven to do so by greed. But if you are part of the hard working ordinary folk on average incomes that make up the majority is it really in your or societies interest to vote for them?
I suppose if you are sold on what you see as some kind of intellectual argument in favour of free market economics then that is excusable and I would respect anyone for taking that stance even though I totally disagree with them. But how many rank and file Tory voters are well steeped in the ideological nuances of the black art that is capitalism? Not many I suspect. Rightly or wrongly my gut feeling is that many vote for the Tories based on some misguided philosophy derived from gutter press headlines in the Sun, the Express and the Doily Mail.
If we let the Tories in now they will fuck up the economy and they will shit on all but their non dom benefactors. Britain beware, the Blue Meanies are coming to get you, and if they do it won’t be pleasant. You have been warned.
Vote Labour on 6th May and keep the Blue Meanies at bay! 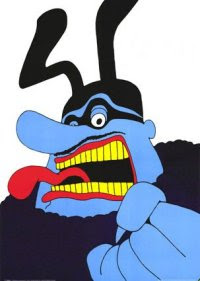 A member of the general public speaking about the election, as heard on the radio: “They only ever come knocking at your door when they want your vote! Never see them at any other time.”
What is meant by this? What is it that political parties are not doing?

I’m contemplating what it means and what the answer is. There has to be one.
at 21:53 No comments:

As a kid 'All Fools Day' offered an opportunity to amuse with schoolboy pranks. It offered an opportunity to try and get one over on your contemporaries, whilst at the same time invariably being fooled by your father. It was a morning of relatively harmless homemade fun. I'm not sure what the custom is/was in other parts of the country but in Suffolk the rule was that if you tricked somebody before noon then they were the April fool, but if you did so after noon then the joke was on you, and you were the April fool. Unfortunately since 'the media' have picked on the 1st of April it all seems to have become a bit tiresome. It's also become less immediate, and despite 'the media' essentially being ephemeral the joke hangs around far longer than one morning thus rendering 'the media' the fools. But we all knew that anyway.
at 12:12 No comments: