In my second year at the Tollgate County Primary School in Bury St Edmunds all the children in our class were given a pen-pal each. Our pen-pals were from a school in Northern Ireland. I have no idea what the school was but I suspect that it was a protestant one given that I was educated in a state system that was heavily biased towards CofE. I have no idea where the school was either, but for some reason Craigavon sits in my mind poking me as if it should ring some bells. This was in the early sixties, so well before the troubles that erupted at the end of that decade.
As you might well imagine, at the age of around seven years old, as a lad more interested in the likes of Whirly Birds, Supercar, Fireball XL5 and American Civil War bubble-gum cards the thought of writing letters just didn’t figure on my radar. I was a boy. I was at a state school on the council estate where I lived. Boys like me didn’t write letters.
Our opposite numbers in Northern Ireland were charged with writing the first letter, and the day duly arrived when Miss Rous handed them out and we got to know who our pen-pal was. They had matched boy with boy and girl with girl. Names were read out and a letter was handed over to the lucky recipient. I waited patiently. My name wasn’t forthcoming. Even at that age I wasn’t perturbed. I was getting used to being forgotten, ignored and being left out of things. A state of affairs that has stuck with me most of my life, and not without its advantages I have to say. But on this occasion I hadn’t been forgotten. I was just left until last. Our teacher explained that there weren’t enough boys in the Irish school to go round all the boys in our class so I had being given a girl pen-pal. A GIRL! Bluueerrr! Oh how I was teased. Oh how I blushed. Oh how unfair the world was. A girl child? Why? I didn’t want to write to some smelly girl in a far off land. Now I know that from East Anglia Northern Ireland isn’t really a far off land. But as a young lad who had hardly travelled out of Suffolk and having very little knowledge of the world, Northern Ireland could have been another planet for all I knew. I don’t remember the poor girl’s name save that her surname was Cochrane. I remember this because it was a surname in my family and a surname that I had never come across apart from that. We had to write a letter back in class, which I did grudgingly. I remember that it was a very short effort and said very little. I remember we had to address an envelope and then hand it in to the teacher. This I did and then promptly forgot about it. The plan was that after this initial exchange we were to carry on at home writing back and forth. A couple of weeks after our letters were despatched an envelope arrived at home. I had post. I never had post! It was from that girl. I never wrote back. I was a horrible kid. I do hope she wasn’t too upset.
I’ve changed a lot since I was that scabby-kneed, scuffed shod schoolboy. It’s funny how puberty changes your attitude to girls. They go from ‘urrgh sissy’ to ‘corrr whoah’ as your voice breaks and your face erupts. “Now, is that green soap for oily skin or oily soap for green skin?” In my mature years thankfully I no longer go ‘corrr whoah’. I have a bit more respect for ladies, I hope. Although, should Christine Lagarde, Judi Dench and Celia Imrie walk by I might find it hard to contain myself. I value friendships, and feel particularly comfortable in the company of women. I wouldn’t be fazed at all about a female pen-pal now.
And, indeed I’m not.
I now have a female type human pen-pal. We came across each other in a slightly serendipitous way, like you do. It turns out we have a similar taste in music, we both have oddball and wacky senses of humour that appear to be derived from common comic reference points, and we have a few character traits that aren’t too dissimilar. We both love Under Milk Wood (a play for voices) which was one thing we discovered early on in our conversing. I’m left wing and she is just wing but that doesn’t really get in the way. We like to banter. It’s all very innocent and mature although far from stuffy, even though she has been known to refer to me as starchy pants. We’ve never met. I don’t know if we will. We’ve never spoken. I don’t know if we will. None of that seems to matter. We enjoy sending emails to and fro, gradually revealing bits of our life. It’s a bit less formal than letter writing but equally, if not more, valuable.
For me now having a pen-pal is very enjoyable. If you’d tried to tell me that when I was seven I’d never have believed you!
I feel quite lucky to found someone that likes communicating in a long handed sort of way. She is a very nice pen-friend indeed and a refreshing change from many of the numpties you come across on the jolly old interweb.
at 21:56 2 comments: 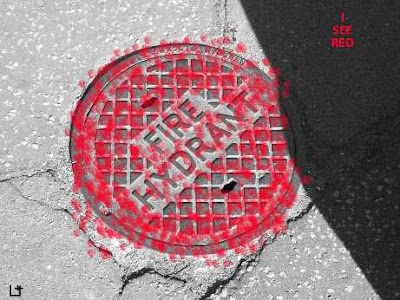 Portrait of an artist as a young man 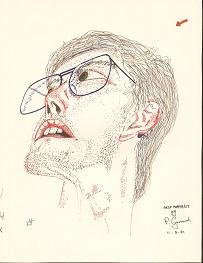 As a young man I had ambitions to be an artist. A visual artist that is. I’ve always been creative, and always felt comfortable expressing my thoughts in a visual format. I considered going to Art College when at school, and then a little later after I’d been at work for a few years. But basically I chickened out on both occasions. I have No regrets about those decisions as I’m not convinced that I would have been happy. One of my concerns has always been prostituting myself, and my art. I’ve never wanted to sell anything that I’ve produced. I’ve always liked the idea of mass producing images and got quite excited when the plain paper copier became readily available. It started me down the road of producing black and white images for repetition. I also had a little bit of success providing images for indie music labels. But life got in the way and I stopped making pictures of any sort. I’ve had one or two false starts in the intervening years but never managed to sustain anything. I’ve recently started again. Only time will tell if I keep it up but I feel a lot more confident. Digital technology helps. In fact it helps a great deal as I now feel that the technology has finally caught up with where I want to be and how I want to express myself. Watch this space.
at 11:56 No comments:

Last Saturday we had the pleasure of visiting the John Jarrold Printing Museum in Norwich. Spending a fascinating couple of hours there. The museum which has limited opening appears to be staffed mainly by retired folk. Nothing wrong with that I might add. Many of whom worked in the printing trade. I’ve been in love with printing since my first John Bull Printing Outfit as a kid.

The museum has a really good cross section of exhibits from early letterpress to latter-day offset-litho, as well as examples of ancillary equipment related to the printing and bookbinding world.

The print museum is housed in part of a very fine building, a former yarn mill. In many ways the museum undersells itself but that’s also part of its charm. Having said that they could tweak the presentation a bit to improve the experience and no doubt increase revenue.
In my early years as a buyer I worked for a firm of manufacturing stationers, Swallow Manufacturing Co Ltd, which did its own printing. I was charged with buying the printing supplies. I loved that bit of my job.
If you ever find yourself in Norwich on a Wednesday with an hour or two to spare you could do a lot worse than going to this fine establishment.


“With twenty-six soldiers of lead I have conquered the world” – this saying has been attributed to a number of famous people over the years, including the great Karl Marx and it adorns the museum brochure.
at 22:19 2 comments:

May I have your autograph please?

I’m never likely to be famous and quite frankly I have no desire to be so. I write this blog mainly for my own amazement and for anyone that happens to come across it. It’s nice when others read it but I see that as a bonus and not something I work very hard to encourage. So if I ever have the misfortune to become famous please be warned. I will not be signing autographs.
We have this strange class of people in this country, mainly driven by cheap ’n’ nasty television and the tabloids, which are famous for being famous. The celebrity is a curious and pointless phenomenon; talentless and yet famous. Pawns in a lucrative latter-day freak show. In my adult life I’ve never asked for anyone autograph and it is something that I don’t think I’ll ever do. I’ve been to concerts where at the end or in the interval the performer will be at the ‘product’ stall signing cds books etc. I’ve even made purchases on odd occasions. But I’ve never ever been tempted to have them signed. I’m not big on hero worship and can never see the point of an autograph. What does it do?
I suppose my unswerving belief that we are all equal kicks in and yes certain people might be very talented, artistic and/or clever having interesting things to say, sing or display but it doesn’t put them above the rest. We are all mere humans; flesh, blood and brains. No more, no less. I don’t acknowledge pedestals. It is why I can never see the point of awards or honours, and why I’m a republican. We are of equal value.
Confession corner
I own an unsolicited photo of The Smiths, signed by Morrissey. I wrote to him in the early days of The Smiths, no idea why. He wrote back and enclosed the photo. I hang on to it. Again I don’t know why. Perhaps I should shred it.
at 18:46 No comments: