The poetry of Albion

One of the first artists that I became really interested in during my late teens was the English painter, print maker, poet and mystic William Blake. This was the late sixties so it sort of went with the times.

His imagery grabbed me first but that then lead on to discovering his writings and in particular his poetry. I've written before on this blog about my love of poetry and I immediately fell in love with William's wordage. Obviously I'd known of Jerusalem and The Tyger from a very early age but that little prepared me for much of his other work. He did go a bit overboard on the old religious nonsense in his work but if you read about his life and how obsessed he was with god stuff you can look beyond that. You can appreciate his work for its richness without mithering yourself on the subject matter.

As a younger man I made a scrappy couple of pieces of art that was inspired by the great master. The first is a lino-cut called Albion, and the second a watercolour entitled Albion rose from where he labour'd. Both are very naive works that are what they are; of a certain time and place. Then a few years ago I did a little experiment using Google Translate; I translated Jerusalem from English to French, and then back to English again. No idea why I did it but here's the result. Also on here is a link to a recording I've made reading one of William Blake's poems entitled Love's Secret. It is backed by a piece of incidental music that I've created. I hope you enjoy it. 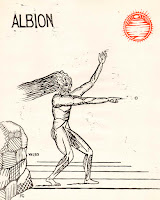 Albion rose from where he labour'd (watercolour)