I’m not against collectives per se. Collectives based on progressive ideas can be a force for good. The concept of international socialism is a laudable cause. But when collectivism manifests itself as nationalism and/or patriotism then we need to worry. Being proud of where you are born, a land mass, a line drawn in the sand is the territory of the half-wit. Why should you want to identify with the people that live in your vicinity just because they live in your vicinity? Life should be all about toleration and celebrating diversity and not about being in one homogenous tribe.

Down the centuries so many barbaric acts have been committed in the name of England, or more accurately the English elite that lord over us, that effectively as a ‘nation’ we all have blood on our hands.

How do we define being English anyway?
We can’t. There is no such thing. Genetically we are a mongrel 'nation' and have been since time began. The Englishman* is a myth. 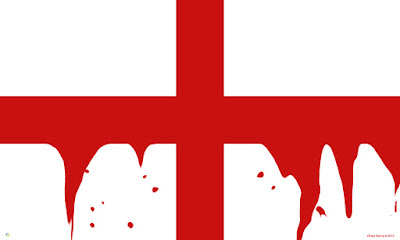 *I use the masculine term because in this unequal world it is men who have invented nationhood and religion in order to oppress.
at 18:00