Resonance, Renewal and Rope-making in Chatham

The Saturday before last saw us, en masse, at Chatham Dock Yards in Kent. We were there to see the Stanley Spencer paintings that he created during WW2 of the Clyde shipbuilders. All eight of Spencer’s paintings – originally commissioned by the War Artists’ Advisory Committee – and more than 20 associated drawings were on display. 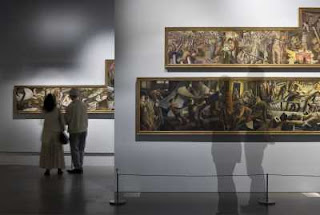 Spencer’s style is very appealing to the eye. His images mostly of men toiling in the Clyde shipyards depict them as safe cuddly marshmallow type figures rather than the grim reality of gritty hard working Glasgow men sweating at a dangerous job. It’s as if he is depicting the inner goodness and honesty of working class people rather than the grim reality of the grime and unsafe working conditions. Spencer packs a lot into each of the pictures. There’s so much going on. They are the sort of paintings that you would find it hard to tire of. The exhibitions on until 12th December so hurry if you don’t want to miss this treat. 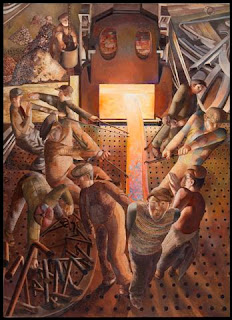 After feasting our eyes on the delights of Stanley Spencer’s paintings we headed for the rope-works on the dockyard site. Our guide was Steve or ‘Mr Steve’ as he informed us we should address him. Steve was ‘in character’ playing the part of a foreman at the rope works in the year of eighteen seventy-five. Steve clearly modelled his character on Genial Harry Grout that not so lovable rogue from Porridge. Steve was most entertaining and informative. Part way through several of us were ‘roped in’ to do some rope-making. My part in the process was to turn a handle on a flywheel that drove belts that in turn facilitated the twisting of the strands. One of my great grandfathers was part owner of Haverhill Rope works around the early part of the 20th century. For a very brief period I felt an affinity with my forebear. Well, sort of. The rope works is most certainly worth a visit. The camera doesn’t lie: 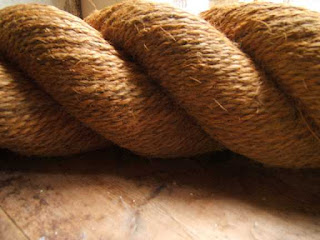 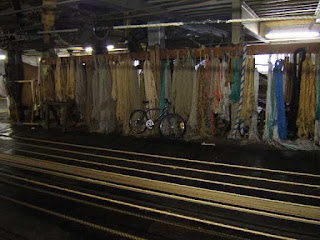 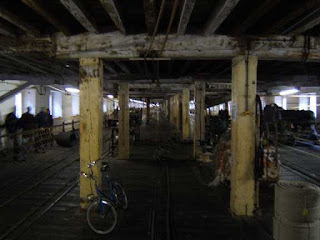 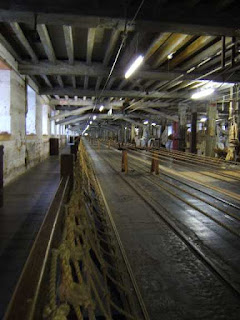