On the first of January this year I purchase a Samsung Galaxy Tab, which is I guess a tablet PC. It is much more versatile, in my humble opinion, than the over-hyped bling that is the iPad. It is packed with so many great features, and one in particular that I love is its ability to display eBooks in a number of different formats, thus allowing me to buy books from a number of different sources. I’ve purchased a read quite a few books in this format now, plus I still read yer actual physical books as well. I read the Jon Richardson book that I reviewed here on it. The only criticism that I have of reading books electronically is that I had no real concept of where I was in the book and as a consequence the end can come unexpectedly sometimes. I suspect that you can set it to show your progress but I haven’t bothered to work that one out. To be fair a little bar does appear when the book appears on the screen but this soon fades and if you become engrossed in the reading it is easy to forget. The advantage it has over a Kindle is that it is back-lit so you can read it in whatever lighting conditions.
But enough of the e-reader apps the Galaxy Tab can do a whole host of things. It is very much an over-sized phone so you get a camera, you can text and make phone calls on it, surf the web and much, much more. I do much of the shopping on it. But more than anything else I use it to tweet on. Since owning this piece of kit I have developed a mild addition to Twitter. The operating system is Android which means that there are thousands of apps and you are not tied in to buying stuff via Apple.

I now use the Galaxy Tab as my mobile phone. I don’t actually make or receive many phone calls as such on any phone. I’m sure it’ll come as no surprise when I tell you that I don’t like talking on the phone. Give me text every time! Clearly I would look an even bigger twerp than I already am if I was to hold the Tab to my shell-like so I have invested in a Bluetooth earpiece

which it has to be said works really well. Again not wishing to look the part I don’t wear the earpiece all of the time. This approach creates another problem; what to do with the slightly fragile earpiece. The solution was provided by a local ‘head’ shop as below: 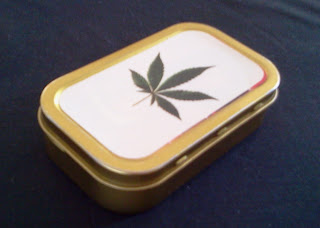 Email ThisBlogThis!Share to TwitterShare to FacebookShare to Pinterest
Labels: stuff