Beauty and the beast

My favourite art gallery, in fact one of my favourite places, in London is Tate Modern. And up until yesterday I had not been there since the new Switch House extension had been opened. Turns out it's a great space. I like.

After a really delicious and very fine lunch at the 9th floor restaurant we headed for the Georgia O'Keeffe exhibition currently on the go at Tate Modern.

I never bother with audio guides at art galleries. I'm not greatly interested in being told about what someone else thinks of a work or about the incidental history of the artist at around the time a piece of art was created. I just want to feed my eyes on it, soak up what I can from it and feel my feelings, independently from anyone else. I also don't like to move around an exhibition in the order it's laid out. I like to flit about either going to where there's some space or to whatever catches my eye. I like to consume art my way. I lose myself in some pictures, totally absorbed by the images and the colours; I commune with them, it can be a neo-meditative experience. 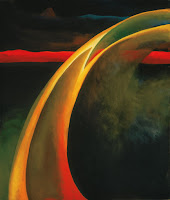 But enough of that bollocks, "what about the exhibition?" I hear you cry. The picture that caught my eye as I entered the first room was Red and Orange Streak. You can't not notice it; a painting of vivid red and orange on a black background. The orange forced my eye down the painting but I fought against it to stare longingly at the red. O'Keeffe's use of colour and the vibrancy with which she painted is like no other I have seen. Room 2 contained many of my favourite paintings including three 'music' pictures; Music - Pink & Blue Nº1, Music - Pink & Blue Nº2 and Blue & Green Music. All three are in oils whilst displaying a pastel like tone but with the sheen of oil. The shapes in her abstractions flow very smoothly and are pleasing to my eye. One gets out of her paintings what one wishes to get out I feel. You may see sensual and erotic shapes and nuances or you may see strawberry and peppermint candy-floss. Perhaps you will see both. Anyway for me it's all very pleasing. My favourite picture of the exhibition was quite a small one called Shell Nº2. It's pure O'Keeffe in one bite-sized chunk. Then there's her capturing of the harsh landscape of New Mexico in intense and bold hues with voluptuous undulating hills. Purple Hills anyone? 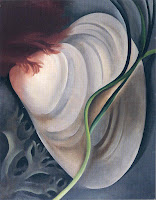 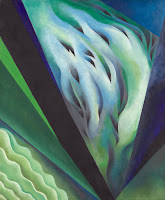 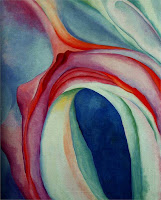 I could eulogise indefinitely but don't worry dear reader I won't. All I will say is if you get a chance between now and the end of the month to go and see it go! In my opinion you won't regret it.

It was a grand day out I thought as we boarded our train home. Oh the joys of travelling on a train out of London at a peak time on a Friday night. After a brief altercation about the seating arrangements we settled down to what would hopefully be a relaxing journey. It was not to be. The be-suited party of half a dozen alcohol-fuelled alpha males saw to that. It is embarrassing to be a man in situations like that. They made half of the journey quite unbearable. Thankfully they all got off at Ipswich. They appeared to have been on some kind of day out which entailed large quantities of drink and possibly with a sport connection. They weren't physically aggressive but their 'banter' was of a bullying nature and often sexist. The first half of the journey home put a bit of a damper on the whole day. There really is no excuse for behaviour like that. Laddishness is a destructive force in society that should be constantly highlighted as totally unacceptable by the mass media rather than the 'eh eh get a load of this' type attitude that currently prevails. Brainless knob ends not welcome here!
at 19:34