My arrogance is fuelled by anger

I'm angry, angry because a country I actually like living in is being destroyed by fascist tendencies. Fascism is ignorance. That's not arrogance by the way, that's fact. Fascism is irrational; it's not based on any moral philosophy or code, just hatred and stupidity. To consider someone as a lesser being because of their ethnicity, gender, sexual orientation or superstitions has no place in a civilised society. Bigotry is destructive, divisive and counterproductive to human progression.

I'm still angry about Brexit, and as a result I lash out sometimes and refer to those that voted for it as idiots. This suggests a certain arrogance on my part. A valid criticism. But in my defence I've yet to hear a non-moronic justification from anyone who voted for it. All I hear is ill informed opinions and gutter press sound bites that crumble in the face of any informed counter argument. There are no sound philosophical arguments to defend the Brexit vote. It is an act of mass-stupidity not seen in this country since Thatcher was elected. And even then she never had the support of even half of those that vote.

My challenge to you Brexit voters out there is to give me one good and credible reason for why Brexit is a sound proposition. Until the day that this happens I shall continue to call you idiots. For idiots you truly are. And to add to the charges of arrogance I will state that I don't believe you can help being idiots. You've been conditioned to be that way. Decades of government policy and manoeuvrings by the elite have created an underclass of Epsilons open to manipulation.

Welcome to our brave new fascist world, or wake up to your ignorance turkeys, and stop voting for Christmas. 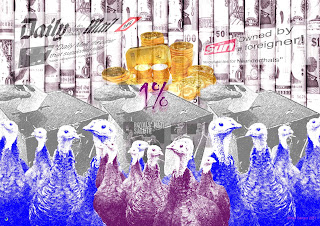