You can’t go far wrong if you use Maslow’s hierarchy of needs as a yardstick to formulate your approach to life, your approach to your fellow human beings, your political views or your general philosophical beliefs. Abraham Maslow developed his Hierarchy of Needs model in 1940-50's USA. Even so, it still remains valid today as a useful tool for understanding human motivation, management training, and personal development. Maslow's ideas regarding the Hierarchy of Needs are today more relevant than ever. They certainly influence my political beliefs and influence the way I give to charity to name just two effects it has on me.
Maslow’s hierarchy of needs dictates that we are all motivated by needs. Those most basic needs are engrained in our psyche, having evolved over many thousands of years. Maslow's Hierarchy of Needs helps to explain how we are all motivated. It is also important to understand that each level of need must be met in turn, starting with the first or lower set of needs. Only then can you move on to the next set of needs, and so on. It should also be noted that if one attains several levels and then lower levels are removed this negates the need to maintain those ‘greater’ or ‘higher level’ needs.

The Hierarchy of Needs was first introduced in Abraham Maslow's book Motivation and Personality, published in 1954. Maslow then went on to extend his ideas in other work, notably his later book Toward A Psychology Of Being, described as ‘a significant and relevant commentary’. Abraham Maslow was born in New York in 1908 and died in 1970. He took his PhD in psychology in 1934 at the University of Wisconsin. This formed the basis of much of his motivational research. His original five-stage Hierarchy of Needs model is clearly attributable to Maslow, but later versions with added motivational stages are not so. Whilst Maslow subsequently referred to various other aspects of motivation, his original Hierarchy of Needs is shown in five clear stages. 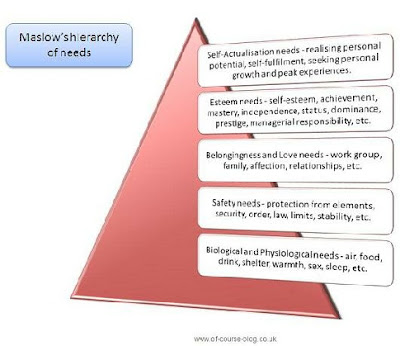 Maslow’s Hierarchy of Needs coupled with the UN Declaration of Human Rights really should form the basis of any civilised society. It should also be the goal of those civilised societies to help other countries to attain these standards. If we concentrated on this the world could become a much better place.