Dr Feelgood were very much the unsung heroes of British music. They paved the way for punk, but they were more than that. In the early 1970s they looked different, they sounded different and oh boy were they excitingly different. I could just not believe Wilko Johnson, the frenetic and mesmerizingly manic lead guitarist of the distant stare. How could anyone play the guitar that well and move up and down the stage at such speed? The combination of Wilko’s guitar sound coupled with front man vocalist and harp player Lee Brilleaux made it a winning formula. Dr Feelgood were pure unadulterated R&B. That’s real R&B of course, and all played at a pace.


Julian Temple films tend to be a bit oddball and Oil City Confidential is no exception. I don’t say that in a derogatory way. I like his style. The film is basically a surrealist documentary. Parts of it reminded me of early Old Grey Whistle Tests. Not for the musical content but the stripped down presentation and the edited in ageing film clips. The film is as much a celebration of Canvey Island as it is the Feelgoods. It charts their lives from childhood up to Lee’s demise. This informative film is a must for any lover of British popular music. There are interviews with all the band members, music colleagues, family, friends and fans, some from archives obviously, but many made for the film. Anchor man in the film is the enigmatic Wilko, although there were sizeable contributions of some of the other Feelgoods. The film left me feeling very sorry for Wilko. Not 100% sure why, but he did come across as a lonely and troubled individual. Not sure if that’s just a facade for blues authenticity or the genuine man. 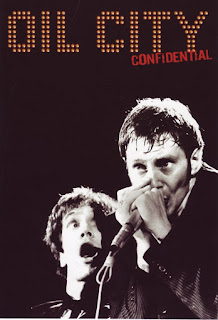 The film finished and we were told that there would be a twenty minute break. I nipped out for that all important toilet break, much needed on a middle-aged bladder and after a two hour film. Some poor folk took the announcement at its word and probably nipped out to the pub. I say poor folk because the concert started not much later than 5 minutes after the film. It had already started when I returned to my seat, but only just. Wilko was giving it what for on his guitar. Early in the concert, and for three songs, he was joined on stage by Alison Moyet who is now a slim vision of loveliness, but can still add weight in the vocal department. Also on stage was a pretty mean harmonica player. A giant of a man who looked vaguely familiar but at first I couldn’t place him. The first name that came into my head was Charles Shaar Murray, but I kept thinking, ‘Surely not’. Surely not, but it actually was Charlie boy. It was a great concert of Dr Feelgood songs and R&B classics that I wished had gone on longer. The only constructive comment I have to offer is that Wilko should make use of guest singers. He’s a great guitarist, but his vocal style, reminiscent of Pete Townsend’s, is not powerful enough to do justice to many of his songs, but full marks to him for giving it a damned good go.