I’ve just completed four weeks of unemployment. It continues to be very emotional. But I do think that I’m starting to get the hang of it.

Today I went to a jobs fair. I went mainly on the suggestion of the nice man at the job centre. I can’t knock what the jobs fair was about because if it helps just one person find employment then I think that it could be measured as a success. Many of the stalls were promoting jobs or volunteering in the care/service sector. Sadly there was nothing to help the recently redundant Materials Manager from the engineering sector. Although, I was tempted to apply for a job with M&S (nice uniforms) who seemed to be recruiting (avoids cheap joke about working in ladies underwear). Failing that there’s always Morrison’s who were also there looking for staff.

I had big plans for when I was made redundant but so far none of them have come to fruition. Things seem to take longer to happen than I’d hoped and also I think I was born with a yellow streak down my back as I too often plump for playing it safe. I have ambitions but seem powerless or lacking in the courage to take the risks that could enable me to prosper. Imagine someone standing on the edge of a high diving board over a swimming pool. I’m the one that turns around and goes back down the steps. Perhaps one day I will have the courage to jump. 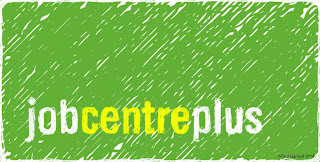 I feel I must speak out in praise of the Jobcentre Plus staff. It can’t be easy working under the yoke of the sadistic Tory government with the culture of fear that they have engendered. The Tory bastards have created that climate of fear to oppress hard working government employees. But despite all that all the staff at my local Jobcentre in Norwich have been friendly, polite and as helpful as they are able to be. I kind of think that there is only one thing worse, in the jobs market, than being unemployed, and that’s working at Jobcentre Plus. So under the circumstances they do a good job and are, in my experience, nice people.

The morons who subscribe to and repeat Tory propaganda ad nauseam would do well to get from behind their Daily Mails and experience the full effects of the Conservative parties own peculiar brand of fascism first hand as I have done.
at 20:35