I fear it will be quite a few years before England can rejoin the EU, but rejoin it will, of that I am in no doubt. Just because the end goal is on the distant horizon it doesn't mean there are not other victories to be won on the way. Victories that will hasten our return.

If you want to be a citizen of Europe again it will require you to be involved in politics to one degree or another. Progressive change isn't carried out by an elite few. That's reactionary change; a reverting back to the bad old days. The more people involved in politics the better. And if you tell me that all political parties are the same and that there isn't one to suit you, then you have one of two choices. Join an existing party and work to change it from within or help form a new party. That's how you take back control!

One thing that is long overdue is the need to change the voting system. First past the post is not fit for purpose, We need a more proportional system. We need more democracy, more accountability. At every level of society. Some form of proportional representation is needed, otherwise the dice are firmly loaded against us.

We need to work towards being a republic. If you are serious about taking back control, one of the key things that needs to happen is to break down the barriers that prevent you from taking back control; the moneyed, vested interest elite, the aristocracy and the monarchy all need to be stripped of their power. That power should belong to everybody.

I've saved the best until last. One of the best ways to hasten our speedy return is to break up the union. The United Kingdom of Great Britain and Northern Ireland needs to be dissolved. It's a ridiculous anachronism that needs to be firmly consigned to history. Breaking the union will create a domino effect that will bring down Tory England with a gigantic thump and free it's Celtic colonies. A United Ireland now seems entirely possible, Scotland could well vote for independence this year and there are rumblings in Wales. It only takes one of them to break free and the door is wide open.

BREAK BREXIT BY BREAKING THE UNION 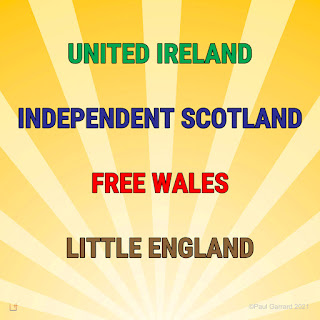