St George wouldn’t have known who the English were, basically because as such they didn’t exist. He may have vaguely heard of a distant, cold and wet land called Provincia Britannia, a godforsaken part of the Roman empire, with its barbarian natives, but that would be all.
He certainly wouldn’t have known of the ‘flag of St George’ as that was an invention by the Italians in mediaeval times.
He was born in the Middle East, most likely Turkey, was in the Roman army and is included in some Muslim texts as a prophetic figure. He has absolutely nothing to do with England, nor does his flag.
If you want to read more about him you will find this very useful.
It’s ironic that George is associated with much of what flag-shaggers would hate, but given that most of them are going to be illiterate knuckle draggers, they will never have bothered to find out. Ah, the blissful ignorance of the bigot. 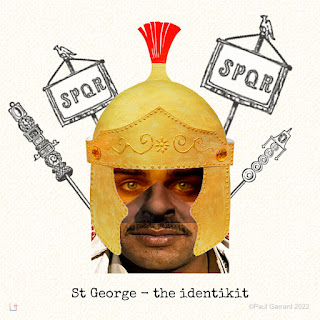 I might add that I don't subscribe to the concept of saints, patron or otherwise. It's all part of the superstitious nonsense that religion is. I just like debunking the myths. There really is no such thing as the English (or British come to that). No, you shut up!
at 08:00