I don't really hold with awards for art. In reality they can only ever be subjective. But that said I was still pleased to hear that Jeff Bridges received a much deserved Oscar last night. As it happens we went to see Crazy Heart yesterday evening and came away having enjoyed it immensely. Since the Big Lebowski I've long thought Jeff bridges to be a great but under recognised actor. So it’s good that he has finally been acknowledged for that talent. Crazy Heart is a wonderfully gritty, amusing and sad film. It charts the travels of one Bad Blake, a down on his luck country blues singer songwriter who lives on the road and out of a bottle. He lives the life of the archetypal little known troubadour a life of seedy motels, casual sex and fast food. He’s on the slow road to oblivion when he pulls up at the crossroads of opportunity. The potential catalyst for his redemption is a young female journalist. I won't spoil the film for you if you've not seen it but shall we say that it ends in a way that lends itself to bitter sweet. 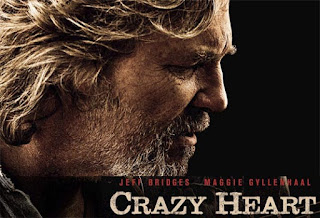 Unfortunately not everyone saw through the emperor’s new clothes that is Avatar and the film received three Oscars. Special effects and no substance is not a good recipe for a film. You might be able to fool large amounts of people with hype, smoke and mirrors. But you can't fool everybody!
at 21:30

Email ThisBlogThis!Share to TwitterShare to FacebookShare to Pinterest
Labels: film