I was recently described, by someone who doesn’t know me, as an aesthete. The pseudo-libertarian blogger concerned, who shall remain nameless, meant it as a term of abuse, but I consider it a badge of honour. It would seem that someone who likes art, cinema, music, theatre and other ‘cultural’ activities is to be despised.

I was brought up on a council estate, when such things existed, and I have always considered myself to be working class. I take the Marxist view that if I don’t own the means of production then I must be working class. Simplistic some might argue, particularly as the ‘the middle-class’ doesn’t really figure heavily in the writings of Marx. Petty bourgeoisie, yes middle-class, no. In truth the middle-class wasn’t invented until after the First World War, so how could it feature in Marxist thinking? Despite considering myself to be working class I do come from middle-class stock and therefore have inherited a certain love of fine things, and fine experiences. I feel very fortunate that at this particular point in my life I am able, and have been able, to experience quite a number of what might be described as ‘aesthetic pleasures’. And so it was last weekend.

It was a nice bright evening when we arrived at the Prospect Tower just south of Faversham. The Prospect Tower was built as a ‘whim’ (a folly really) in the grounds of Belmont House. It seems to have become a glorified cricket pavilion, to which the many pictures that adorn the walls affirm. It is now owned by the Landmark Trust, an organisation that restores old usually quirky buildings and then rents them out as holiday ‘cottages’. As we sat in the main room drinking our tea, with the lady reading from ‘The Log’ (an upmarket guest book), it suddenly struck me how middle-class this all was. Oh dear!

We had a need for a long weekend away, a weekend somewhere where we could relax, not do too much on the tourist front, read books, write and feed our faces without having to worry about doing chores and other stuff. It was to be a weekend to recharge our batteries hence we plumped for somewhere to stay that was aesthetically interesting. A place to enjoy being in rather than just a dormitory. Somewhere to stay in. Having said that we did venture out a couple of times, once to Faversham and once to Whitstable, both nice places. Faversham is probably the most spread out market town that I have ever been to, giving the impression of being sparsely populated, although I’m sure it isn’t. There were people were about shopping, and the two pubs we drank in were reasonably busy. Whitstable proved to be a different kind of seaside experience. A long winding sea wall to walk along with a largely uncommercialised seafront which made a refreshing change. The south east is always portrayed as a bed of affluence, but this part of Kent doesn’t know it. I was amazed at how non-affluent it appeared to be. House prices seem most reasonable, virtually on a par with rural Norfolk, and the inhabitants are very salt of the earth. 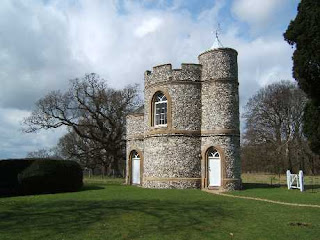 The Prospect Tower is essentially made up of three cylindrical parts. The first houses the spiral staircase, the larger central cylinder houses the bedroom and above that the sitting room and at the other end you have the shower-room with the kitchen above rooms in the round, with period furniture. 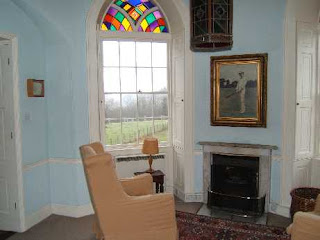 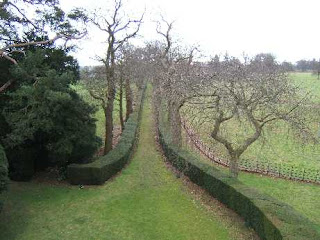 The view from the battlements

One wonderful discovery that we made during our weekend away was a gem of a farm shop turned sizeable food retailer Macknades. When we visited their web site before going we thought, “This is too good to be true”. Thankfully it wasn’t, it was everything we’d hope for and more. We made three visits there. Oh why haven’t we got a place like it where we live?

I don’t know Kent that well but the little I’ve seen has left me hungry for more. We’ll be back!
at 22:16