The gospel according to Alan Measles

As I’ve said before the arts are the thinking person’s sport and so on Saturday while Neanderthals sped northward for the Norwich v Chelsea match we trained it down to London for a bit of yer actual culture. Our planned destination was the British Museum and the Grayson Perry exhibition entitled ‘The Tomb of the Unknown Craftsman’.
We only just got tickets. They seem to sell out fast on the day. What a truly wonderful building the British Museum is. I hadn’t been since my schooldays. The rotunda is a magnificent construction and along with the glass roof makes for a light and airy space. As there was a fair bit of time between buying the tickets and our allocated slot we decided to go for a meal. We’ve had some very good meals in museums up and down the land and the Court Restaurant in the British Museum; both the food and the service were first class; the staff were just so nice; a destination in itself. 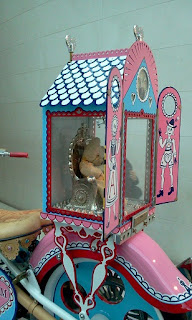 The entrance to the Grayson Perry exhibition is guarded by his pink motorbike, as used on his pilgrimage. The glass case affixed to the back now houses Alan Measles’ stunt double. The queuing and entry arrangements left a lot to be desired. You would think that an august and mature institution like the British Museum would have this sort of thing down to a fine art so to speak. Seemingly not. And once inside things didn’t improve greatly. I think that far too many exhibits are concentrated at the beginning thus causing a human bottle neck. The exhibition itself was a piece of inspired genius. Grayson Perry continues to go up and up in my estimation. In my opinion he is one of our greatest living artists; up there with David Hockney, Anthony Gormley and Gilbert and George. Grayson’s work is three dimensional. He’s a potter, a sculpture a tapestry and cloak designer. The exhibition is a mix of his work along with pieces that he has selected from the British Museum collection to compliment his work. I love Grayson’s pots. They are adorned with philosophical slogans. He has his own personal deity, Alan Measles his lifelong teddy bear, which features in many if not all of Perry’s work. He also has a wry and acute sense of humour. Three of his sculptures, a skull, a father and a mother all reminded me of a line spoken by the ghost of Jacob Marley “I wear the chain I forged in life”. The pièce de résistance is the eponymous Tomb of the Unknown Craftsman a huge cast iron sculpture based around a sailing ship and is a wonder to behold. Grayson Perry is a very unique artist and a true visionary. If you get the chance to see his work you should go.