Last Saturday we returned home from a wonderful holiday in France:

After a hectic first weekend of our holiday with our friends near Compiegne we made our way down to Bayeux for a relaxing few days. We had rented a Gite right in the town.

We are not very good tourists. Most people seem to like going to places and tick as many tourist 'attraction' boxes as possible. Not us. We like our holidays to be slow and gentle.

For most visitors Bayeux is not a destination. It's just another stop on the relentless ardour that is American coach trip hell. Most visitors seem to come to the area to visit the beaches famous for the D-Day landings. Something that didn't greatly interest us. We had come to Bayeux to see the Tapestry and generally chill.

The Bayeux Tapestry is something quite remarkable even though it is embroidery rather than tapestry. Pictures don't really do it justice. It's not as tall as I expected but much longer than I had imagined. We had decided to visit late in the afternoon in an effort to avoid the crowds. Turning up at 5 o'clock certainly paid off. There were thankfully very few other visitors so we were able to peruse the tapestry at our leisure. You can gauge how busy it must get at peak times by the speed of the commentary on the electronic guide that you are given on entry. We listened and walked at a fairly rapid pace along the almost 70 metres of the tapestry. And then, the commentary dispensed with, we went back to the beginning enjoying the work at our own pace. Studying bits of interest in great detail. And a mighty fine experience it was indeed. It not only tells the story of the Battle of Hastings but events leading up to it. From a Norman perspective obviously. Pro William the Bastard nee Conqueror most certainly. 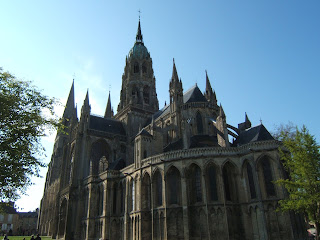 Bayeux's cathedral is quite a spectacular edifice to behold. Standing head and shoulders above the whole of Bayeux with its spiky twin towers at the entrance, a central domed tower with a spire on top all vying for attention. The medieval equivalent of the Ferrari or Lamborghini and a cudgel all rolled into one; a rich man's penis extension and a vehicle for oppression.

We had no real desire to visit any of the D-Day landing sites. That would seem to be the domain of very narrow minded people. Although we did make a couple of small exceptions. As a pacifist I am so often misunderstood by those that seek to glorify war. I will be accused by those types as being disrespectful to those that fought and died for our freedom but I am most certainly not. We stop on the coast road overlooking the site of some of the landings the skeletons of the mulberry harbours still visible after all this time. I felt sick in my stomach and I welled up inside at the thought of the death and destruction that reigned over that area on people of my grandparents' generation. Nobody should have had to of gone through such unimaginably fearsome times. War is evil. No one ever wins. War serves no purpose.

We had a lovely afternoon in Deauville a rather quirky town on the coast east of Bayeux. It's a seaside town that looks as though it could have been designed in Hollywood. Quintessentially French essence distilled into a concentrated form. Masses of timber framed buildings with towers and conical roofs. 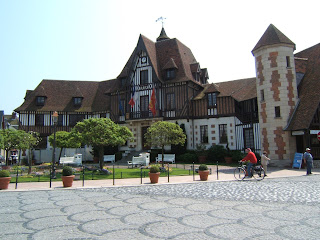 On the way back we stopped at the Pegasus Bridge, we just felt we had to do something. I really can’t put into words how it made me feel. 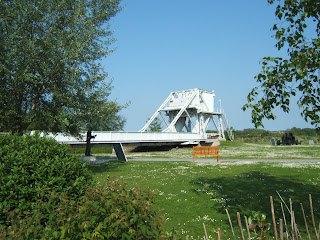 Bayeux is a nice little French town to spend time in. We spent much of our holiday just wandering around and pottering there. We’re not good at the relentless schedules. 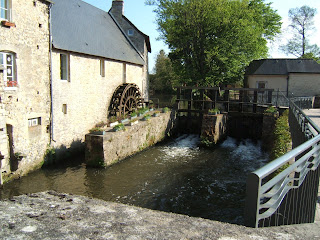