To distort* slightly Goebbels’ quote “If you tell a lie… ...keep repeating it, people will eventually come to believe it.” and that’s just what has happened in terms of how we classify what a decade is, thanks to the media. They peddled the lie that the millennium ended on the 31st December 1999 (when obviously it ended a year later of 31/12/2000) and they continue to end decades a year too early. The Victorians knew when decades, centuries and millennia ended why don’t we?

There's enough lazy thinking and illogical behaviour in the world without adding to it unnecessarily. The last year of a decade, a century or a millennium always ends in a zero. It's very simple maths. It has nothing to do with Gregorian or Julian calendars. People that even mention that in a conversation about this stupidity are going off on a pointless tangent. It’s all about logic. Whatever calendar you work to, if you use numbers as the measurement, the first year of the calendar will always be one. You wouldn’t have a year zero. Zero represents nothing. Having a year zero would be like saying this is a year but really it isn’t as it’s a year without value. So by applying logic the first year is always 1, and therefore the last year of the first decade will be year 10, and thus the pattern will continue. If you can’t grasp that then there is no hope for you quite frankly.

Now you're probably saying, so what? In the great scheme of things does it really matter? Well on one level it really doesn't, but it's an indicator of what a poor state we are in if people can't grasp a simple maths concept. If people aren’t capable of understanding simple maths how the hell are they going to grasp even the basics of economics, and therefore be able to make political/voting decisions?

Of course you could argue that you can re-calibrate the calendar and start decades, centuries and millennia at 0. Which you could do, but you could also take 14.5 years and decide to call it a Doris! I'm not sure how useful it would be but there's nothing to stop anyone doing it. The whole point of measurement surely is that it's a communication tool. A way of telling someone how much of something you have got etc. If we're all using different measurements how do we communicate what we really mean? 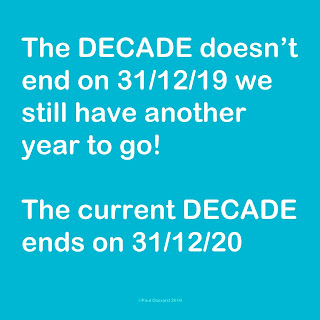