Ask ten Labour party members why we lost the election and you'd get at least eleven different answers. I have no idea (apart from Brexit) as to why we lost the election in such devastating fashion. I hope when the dust has settled all will become clear. But until that time arrives it would be useful to stop the blame game. To one degree or another all party members are responsible for what happened. You cannot blame one person or group of people.

I’m a remainer but I feared all along that calling an election before the dreadful deed was done was asking for trouble. The opposition parties should have stood firm. But of course they didn’t. The cowardly LibDems capitulated yet again. Anyway what is done is done and we can’t go back.

One thing as a party that we need to realise is that we are still a broad church. We need to accommodate as many views as we can. I say this as someone on the left of the party. There is room for both socialists and social democrats in the Labour party. We can’t have one side or the other throwing their toys out of the pram if they don’t get all their own way. If we don’t appeal to as wide an electorate as possible we can never hope to regain power. And not only that. We need to at least be talking with other parties on the left of the Tories. Whilst we don’t necessarily want to mimic their policies we need to at least have some understanding. Looking at the overall numbers of votes cast and where they went it would appear that a large proportion went to the Greens and the LibDems; divided, they (the Tories) conquered. We have to at least discuss some kind of cooperation. Don’t we?

But problems don’t just lie with the Labour party. There are a lot of very vulnerable people in our society. People that will be at the mercy of the bullying, uncaring, vindictive Tories. How do we protect them? Can we assemble a broad coalition of resistance? Can we form our own alternative economy? Can we opt out of as much of the mainstream, the part that the neoliberals control, as we can? We need to try and as much as possible hit the neoliberals where it hurts. Break free from many of the bonds they control us with? We need a rebel alliance made up of left of centre organisations, societies and charities. A large well coordinated resistance movement. Our far from perfect democracy is about to be destroyed. We need to hold on to as much as we can.

I don’t have many answers yet. But I do have a lot of questions. Some of those questions are difficult, but we shouldn’t shy away from them. We must ask them. Divided we will fall again, united we can win at every opportunity going forward. 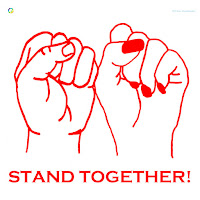