Nothing is ever black and white

Be it political or religious, fundamentalism is the greatest philosophical danger to humankind. There are no one-word answers to the problems that beset the world. No simple solutions. Life is much more complicated than a gutter-press headline. But ‘public debate’ all too often sinks into polarised, lowest common denominator, narrow minded, sound biteable, tit for tat, verbal volleying.

You don’t stop murder by having the death penalty. You don’t necessarily improve education by building more schools or improve health care by employing more doctors. Cost saving, the great mantra of the modern age, is probably a myth. Is it really possible to get something for nothing, or is a cost saving really just shifting the burden elsewhere, or a mixture of the two?

Nothing is ever black and white. There are invariably shades of grey. Right and wrong are only matters of opinion and not some kind of universal truth. Nothing is ever as easy as it seems. That’s not being glass half full or pessimistic about things. Life is complicated, and dealing with life is equally complicated.

As much as I’m in favour of the redistribution of wealth it would never be as simple as collecting up all of the money in the country and dividing it up equally amongst the population. It would never be as simple as everybody being paid exactly the same wage. Then there is the question about what we mean by ‘wealth’. Is it purely about how much money a person has? Could it be measured by how much knowledge or how many skills they have learned? Perhaps it is about someone’s health, life expectancy and/or quality of life. Or, as more likely is it a mixture of those factors plus a myriad of others? Wealth, whether it is financial, health or knowledge based, doesn’t always have anything to do with how much you acquire or are given, it is often about how you use what comes your way.

Culture, economics, education, health, law and order and many other aspects of life are so intertwined, so reliant on each other, that if you legislate or change one thing it will usually affect something else.

Just like the ‘Butterfly Effect‘, if you make a change in one place, it can reverberate and create change elsewhere often in unexpected places.


Nothing is ever black and white. There are invariably shades of grey. 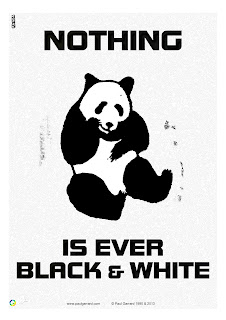 Email ThisBlogThis!Share to TwitterShare to FacebookShare to Pinterest
Labels: black and white