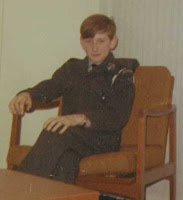 
All my adult life I’ve been a pacifist. Peace can only ever be the sane option that an intelligent, rational human being can choose. War is failure. War solves absolutely nothing.

I haven’t always recognised this. At the tender age of fourteen I joined the Air Training Corps, an offshoot of the RAF (and I don’t mean the Red Army Faction). It existed to groom and indoctrinate young boys into the cult of murder and a life in the Royal Air Force.

I have to confess that I enjoyed much of my time in the ATC. As well as learning the meaning of Esprit de corps I learned to shoot a rifle and had the opportunity to fly a couple of times. I never grasped the ability to march in time with my fellow cadets though. I blame two left feet, the lack of music and the fact that it used to bore me shitless on never mastering the left right thing.

But despite the fact that it is something I now find abhorrent. I did learn from the experience and I suppose because I am the sort that will question most things I didn’t succumb to their propaganda. The exposure to discipline and the culture of being ‘an officer and a gentleman’ certainly did me no harm, but I acknowledge it might not have suited everyone.

Going away to camp for a week was also right up my street, after getting through the initiation ceremony that is. Initiation at ATC camp was known as Brylcreeming. Interestingly it had no connection with hairdressing or that particular hair grooming product, although I suppose in the mists of time it had been pressed into service. Shaving foam was the unction of choice for the Brylcreeming ceremony in my day. Brycreeming was carried out after barrack room lights-out. The victim was de-bagged and his bollocks were sprayed with shaving foam. It was customary to resist the treatment, and after a brief struggle and an application of the said foam you were left on the cold floor in the dark, half naked and squirming. Oh how we laughed. The rest of camp was good. We took part in a night exercise. Did some shooting. Had a flight in an Air Support Arm Britannia; which was due to fly us up to Prestwick, but half way through the flight we developed engine trouble and had to turn back. As we came into land we could see fire engines and ambulances waiting, they then proceeded to follow us down the runway sirens blaring. It was so exciting. I didn’t twig the danger of the situation until much later.

A warning to children everywhere﻿
at 17:46